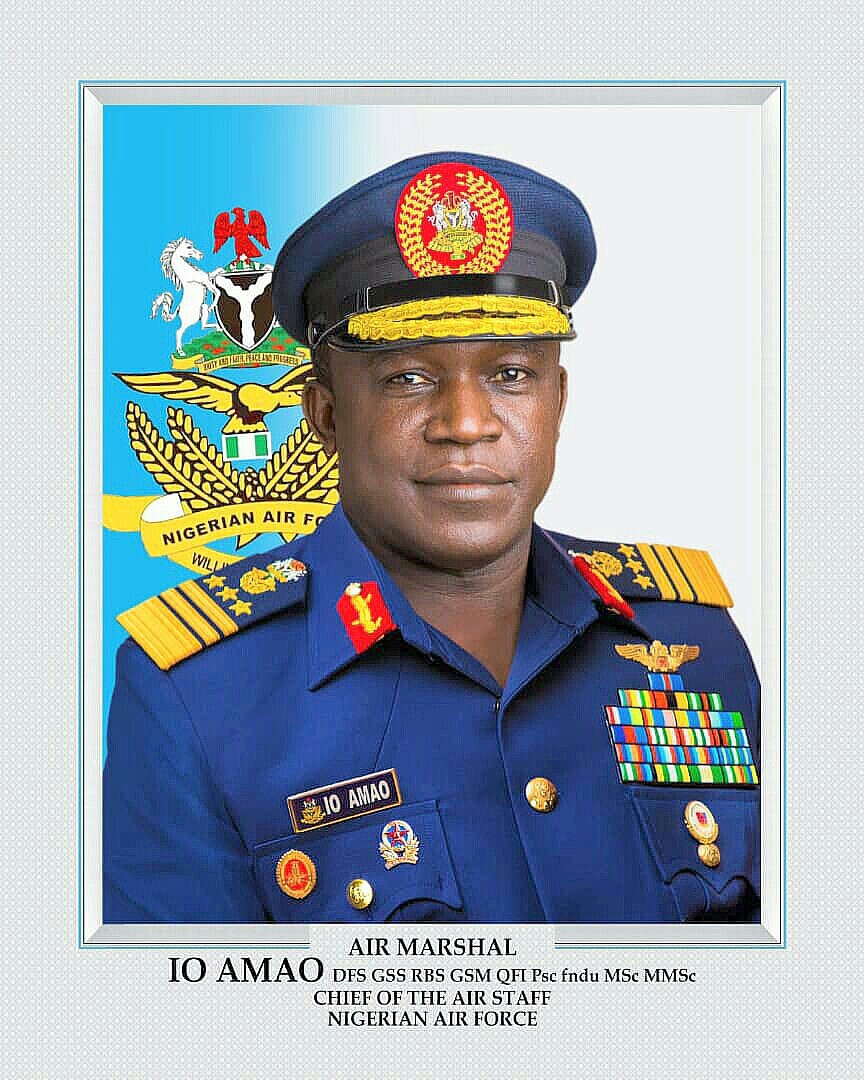 Chief of the Air Staff

Born in Enugu on 14 September 1965, Air Marshal Oladayo Isiaka Amao, is an indigene of Oshogbo Local Government Area in the State of Osun, South West Nigeria. He joined the Armed Forces of Nigeria as a Cadet of the Nigerian Defence Academy Regular Course 35 in January 1984 and, upon completion of his training at the Academy, was commissioned a Pilot Officer in the Nigerian Air Force in December 1986. In an illustrious career spanning over three and a half decades, the distinguished senior officer has served in diverse roles cutting across Operational, Instructional, Command, Staff, Diplomatic, Policy and Strategic Leadership functions.

Operationally, as a seasoned Fighter Instructor Pilot on the Alpha Jet, Air Marshal Amao served as a Squadron Pilot at the 99 (now 407) Air Combat Training Group Kainji. He subsequently worked as an Instructor Pilot at both the 301 (now 401) Flying Training School Kaduna and the 303 (now 403) Flying Training School Kano, with over 1,500 Jet and Instructional Hours to his credit. Notable in his operational experiences are his participation in the draw-down of the Africa-led International Support Mission to Mali (AFISMA), as well as the counter-insurgency Operations ZAMAN LAFIYA and LAFIA DOLE in the North East of Nigeria. His Command experiences cover the spectrum from the tactical, through the operational to the strategic levels, endowing him with a holistic appreciation of the complexities of leading a fighting force. Significantly in this regard, he commanded the 407 Air Combat Training Group Kainji and the 75 (now 103) Strike Group Yola. He went on to become Air Component Commander for both Operation ZAMAN LAFIYA and Operation LAFIYA DOLE, also serving as Deputy Theatre Commander for the latter. In these roles, he oversaw a synergistic employment of Air Power to effectively support land forces in sustaining stabilization operations across the North East Theatre. The Air Marshal then rose to the position of Air Officer Commanding Tactical Air Command, the lead combat element (often referred to as the “teeth”) of the Nigerian Air Force.

In terms of Staff experience, Air Marshal Amao was privileged to serve in critical capacities which enabled him to contribute significantly to development of the Service whilst acquiring unique perspectives and insights which have shaped his strategic thoughts. He was, at various times; Air Assistant to the Chief of the Air Staff, Assistant Director of Operations, Director of Policy, Director of Training as well as Director of Operations, all at Headquarters Nigerian Air Force. This rich bouquet of Strategic-level Staff experiences instilled in him a deep appreciation of developmental imperatives of the Service.

Moreover, Air Marshal Oladayo Amao possesses a keen understanding of international relations as they affect defence matters, acquired through service as Deputy Defence Adviser and Acting Defence Adviser at the Nigerian High Commission in London, United Kingdom. In the area of Policy and Strategic Leadership, he has developed vital competencies in the course of his service as Chief of Training and Operations and subsequently Chief of Policy and Plans at Headquarters Nigerian Air Force. Most recently, until his appointment as the Twenty First Chief of the Air Staff, Air Marshal Amao was the Commandant of the Armed Forces Resettlement Centre, Oshodi, a key institution tasked with the responsibility of training and empowering military personnel for post-service re-integration into the civil society.

Air Marshal Oladayo Amao is decorated, amongst others, with the Forces Service Star, Meritorious Service Star, Distinguished Service Star and General Service Star, in addition to the General Service Medal and the River Benue Star, which were awarded for his service in various military campaigns. He has also been privileged to benefit from strategic leadership development training in notable indigenous and international institutions; he is an alumnus of the prestigious Armed Forces Command and Staff College Jaji-Nigeria as well as the Defence Services Staff College Wellington, India. He is a Fellow of the National Defence University of China and holds a Master of Science in Defence and Strategic Studies from the University of Madras India as well as a Master of Military Science and Strategy from the National Defence University China. He is also a certified aircraft accident investigator trained in Karachi, Pakistan and at the Nigerian College of Aviation Technology Zaria, Nigeria as well as being a Qualified Flying Instructing (QFI).

Air Marshal Oladayo Isiaka Amao is happily married to Mrs Elizabeth Olubunmi Amao, and the union is blessed with 3 sons. At his leisure, he enjoys reading, dancing and travelling as well as playing volleyball and golf. He also has a keen interest in fish farming.