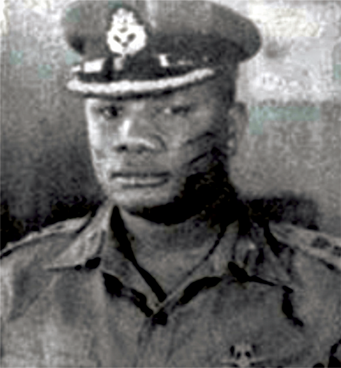 Colonel Shittu A Alao was born in Dorowa Babuje in Plateau State.  He was among the 4 Nigerian Army Officers that were first seconded to the Nigerian Air Force (NAF) with a view to taking over command from the Germans. He took over the leadership of the NAF from Brigadier Kurubo on 5 August 1967. Following his secondment to the NAF, Colonel Alao was sent to Germany in 1963 for a one-year indoctrination course on all aspects of air force training. On return from Germany, Colonel Alao was appointed Senior Air Operations officer at Headquarters NAF (HQ NAF).Colonel Alao headed the NAF in its most trying period, that is, the thick of the civil war. Though unprepared for the war, Colonel Alao infused a sense of patriotism and confidence in his officers. He led by example and personally carried out bombing raids during the war. A very brave officer and pilot, he died on active duty while on a solo flight in an L-29 aircraft in Southern-western part of the country when he ran into bad weather and subsequently ran out of fuel. He tried to make an emergency landing, but instead, ran into a tree and died in the process.