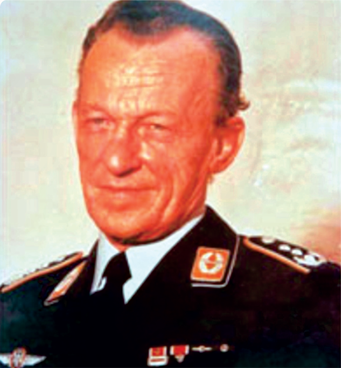 Colonel Gerhard Kahtz was the first Chief of the Air Staff (CAS) of the Nigerian Air Force (NAF). He was officially designated as the Commander of the NAF in 1963 when Nigeria signed an agreement with Germany to help build an air force for Nigeria. Born on 26 November 1922, in Durlach, Germany, Colonel kahtz was a professional architect before he was commissioned as an officer into the German Air Force (GAF). He served the GAF as a Luftwaffe pilot in the Second World War, during which he was decorated with the prestigious Iron Cross for his courage and devotion to duty. His administration brought the first set of aircraft into the NAF inventory. Among these were the Allouette helicopter and fixed wing aircraft, such as the DO-27, Piaggio and the Nord Atlas.