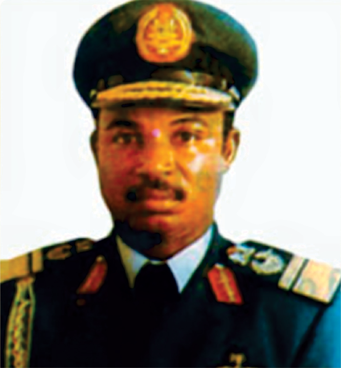 Air Vice-Marshal Abdullahi Dominic Bello took over the leadership of the NAF as the seventh Chief of the Air Staff (CAS) on 15 of April 1980. He was enlisted into the Nigerian Air Force (NAF) as an officer cadet in October 1963. He was the first NAF Officer to attend the prestigious Air War College in the United States. He was born in Jimeta, Yola on 14 December, 1942. During his tenure as the CAS, he introduced the Benevolent Welfare Fund to alleviate the sufferings of bereaved families of deceased NAF personnel. He also introduced the Aircrew Insurance Programme and established the NAF Military School, Jos and Air Force Secondary School, Ikeja, all in 1981.